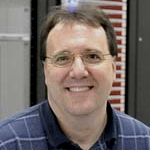 Barry Smith is a distinguished fellow in the Mathematics and Computer Science Division of Argonne National Laboratory.  He is a SIAM Fellow and the author of the book Domain Decomposition: Parallel Multilevel Methods for Elliptic Partial Differential Equations. His research focuses on scalable algorithms and software for partial differential equations.  Smith is the lead developer of the Portable Extensible Toolkit for Scientific Computing (PETSc), a parallel toolkit for the scalable solution of PDE-based problems.

Smith is a recipient of the 2015 SIAM/ACM Prize in Computational Science and Engineering (joint with the PETSc team); he is the winner of a 2011 Ernest Orlando Lawrence Award (joint with L.C. McInnes) for outstanding contributions in research and development supporting the Department of Energy and its missions. PETSc is a recipient of a 2009 R&D 100 Award. PETSc was selected as one of the Top Ten Breakthroughs in 2008 by the DOE Panel on Recent Significant Advancements in Computational Science  Smith was a finalist for the 2009 Gordon Bell prize in the special category; he received a 1999 Gordon Bell prize in the special category.