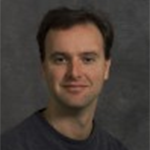 Brian Van Straalen received his BASc Mechanical Engineering in 1993 and MMath in Applied Mathematics in 1995 from University of Waterloo. He has been working in the area of scientific computing since he was an undergraduate. He worked with Advanced Scientific Computing Ltd. developing CFD codes written largely in Fortran 77 running on VAX and UNIX workstations. He then worked as part of the thermal modeling group with Bell Northern Research. His Master’s thesis work was in the area of a posteriori error estimation for Navier-Stokes equations, which is an area that is still relevant to Department of Energy scientific computing. He worked for Beam Technologies developing the PDESolve package: a combined symbolic manipulation package and finite element solver, running in parallel on some of the earliest NSF and DOE MPP parallel computers. He came to LBNL in 1998 to work with Phil Colella and start up the Chombo Project, now in its 13th year of development. He is currently working on his PhD in the Computer Science department at UC Berkeley.