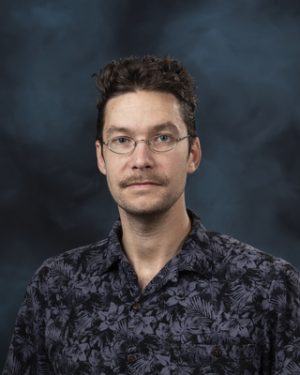 David Rogers is a Performance Engineer and Computational Scientist in the Advanced Computing for Chemistry and Materials at ORNL’s National Center for Computational Science. He obtained his Ph.D. in Physical Chemistry from University of Cincinnati in 2009 where he worked on applying Bayes’ theorem to the free energy problem with applications to the statistical mechanics of liquids. After a Post-doctoral fellowship at Sandia National Labs 2009-2012, he was a faculty member of the USF Department of Chemistry 2013-2019. He has worked on theory and application of statistical mechanical methods in liquids, biomolecules, and quantum models.

His current research interests include computation, mathematics, and theory enabling HPC methods for electron- to fluid-scale modeling. Especially interesting open problems include applications to small nonequilibrium systems, dielectric friction, dispersion, hydration, and its role in nanoscale devices. David’s focus at ORNL is developing more powerful and general libraries and interfaces for modeling these systems at scale.