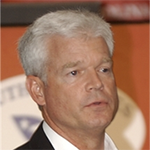 Douglas B. Kothe is the Director, Consortium for Advanced Simulation of Light Water Reactors, a U.S. Department of Energy Innovation Hub, Oak Ridge National Laboratory. Doug graduated Summa Cum Laude in 1983 with a Bachelor in Science in Chemical Engineering from the University of Missouri – Columbia, followed by his Masters in Science and Doctor of Philosophy (PhD) in Nuclear Engineering at Purdue University in 1986 and 1987, respectively. He conducted his PhD research at Purdue on inertial confinement fusion target design while serving as a Graduate Research Assistant at Los Alamos National Laboratory (LANL). After a brief period in 1987-1988 as a nuclear weapons designer where he participated in the underground testing program at the Lawrence Livermore National Laboratory, he returned to LANL for almost 20 years where he held a number of research, program, and line management positions in support of applied and fundamental defense-related R&D programs sponsored by the DOE NNSA, NASA, and the DoD. Doug then joined Oak Ridge National Laboratory (ORNL) in 2006 as Director of Science in the National Center of Computational Sciences and since 2010 he has been the Director of CASL (Consortium for Advanced Simulation of Light Water Reactors; www.casl.gov), a DOE Energy Innovation Hub. Doug’s research interests and expertise lies in the development of physical models and numerical algorithms for the simulation of a wide variety of physical processes in the presence of incompressible and compressible fluid flow.