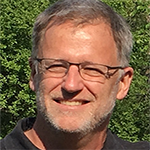 Foster’s research contributions span high-performance computing, distributed systems, and data-driven discovery. He has published hundreds of scientific papers and eight books on these and other topics. Methods and software developed under his leadership underpin many large national and international cyberinfrastructures.