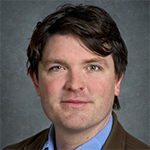 Jeff Johnson is a computational scientist in the Hydrogeology Department at Lawrence Berkeley National Laboratory. He received his Ph.D. in Applied Science from UC Davis in 2009 and worked as a postdoctoral fellow in the Computational Research Division before coming to the Earth Science Division in 2011. Before that, Jeff spent several years as a scientist at Lawrence Livermore National Laboratory, working on parallel simulations relevant to problems in high energy density physics.

Currently, Jeff is working on the “Multiscale” climate project, in which the CHOMBO framework is used to solve the equations of atmospheric dynamics, and the Community Atmosphere Model (a component of the Community Earth System Model) is used to provide sub-resolution physics representing various atmospheric processes.
As a developer on the ASCEM project’s HPC Simulator effort, he adds support for various geochemical packages using the Alquimia library. Jeff also provids computational support for the Sustainable Systems SFA 2.0 project, helping scientists use Amanzi to answer science questions involving carbon-producing and -consuming organisms at the watershed scale.

Jeff is interested in improving the accuracy and robustness of parallel simulations, and developing tools that help scientists do reproducible work. Currently, he is working with J. Michael Owen and David Starinshak at the Lawrence Livermore National Laboratory on polytope, a C++ library for generating 2D and 3D Voronoi tessellations for unstructured meshes.