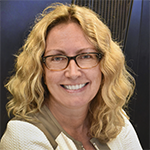 Kleese van Dam will lead CSI, which leverages computational science expertise and investments across multiple programs at Brookhaven Lab—including the flagship facilities that attract thousands of scientific users each year— to tackle the “big data” challenges at the frontiers of scientific discovery. Key partners in this endeavor include nearby universities like Stony Brook, Columbia, Cornell, NYU, and Yale, and companies such as IBM Research.

With more than 25 years’ experience in the field, Kleese van Dam comes to Brookhaven from Pacific Northwest National Lab (PNNL) in Richland, WA, where she most recently served as Associate Division Director of the Computational Science and Mathematics Division, as well as Chief Scientist and Lead of Data Services. Her responsibilities included a wide range of data management research and development projects in applied computer science research. She also led the creation of a data analysis thrust area in PNNL’s Chemical Imaging Initiative. In 2014, she and her colleague Bill Pike established a new five-year research initiative on streaming analysis (called Analysis in Motion) for a variety of application areas including experimental science.