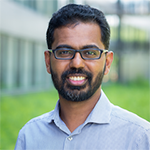 Prasanna Balaprakash’s research interests span the areas of artificial intelligence, machine learning, optimization, and high-performance computing. Currently, his research focus is on the automated design and development of scalable algorithms for solving large-scale problems that arise in scientific data analysis and in automating application performance modeling and tuning.

He received a bachelor’s degree in computer science engineering from the Periyar University in Salem, India; a master’s degree in computer science from the Otto-von-Guericke University Magdeburg in Germany; and a Ph.D. in engineering sciences from CoDE-IRIDIA (AI Lab), Université libre de Bruxelles, Brussels, Belgium, where he was a Marie Curie fellow and later an FNRS Aspirant. He was the chief technology officer at Mentis Sprl., a data analytics startup in Brussels, Belgium for a year before moving to Argonne in late 2010, where he was a postdoc until late 2013.