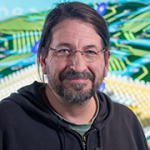 Rick Stevens is Argonne’s Associate Laboratory Director for Computing, Environment and Life Sciences. Stevens has been at Argonne since 1982, and has served as director of the Mathematics and Computer Science Division and also as Acting Associate Laboratory Director for Physical, Biological and Computing Sciences. He is currently leader of Argonne’s Petascale Computing Initiative, Professor of Computer Science and Senior Fellow of the Computation Institute at the University of Chicago, and Professor at the University’s Physical Sciences Collegiate Division. From 2000-2004, Stevens served as Director of the National Science Foundation’s TeraGrid Project and from 1997-2001 as Chief Architect for the National Computational Science Alliance.