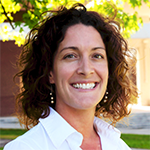 Dr. Rommie Amaro is a native of the south side of Chicago and earned her bachelor’s degree in chemical engineering with high distinction from the University of Illinois at Urbana-Champaign in 1999. After graduating, she joined Kraft Foods, Inc. as an Associate Research Engineer in Glenview, Illinois, working mainly on Philadelphia Cream Cheese productivity and commercialization projects. After two years of working with condensed matter, she returned to Urbana to attend graduate school in Chemistry.

Dr. Amaro earned her Ph.D. in chemistry in the lab of Professor Zan Luthey-Schulten, where she worked mainly on computational methods to reconstruct free energy profiles from non-equilibrium pulling experiments of ammonia conduction through a beta-barrel protein involved in histidine biosynthesis and studying mechanisms of allosteric regulation in proteins. While a graduate student, she also worked closely with the National Institutes of Health (NIH) Resource for Macromolecular Modeling and Bioinformatics, led by Professor Klaus Schulten, where she helped develop a series of workshops that have now been taught worldwide.

In 2009, Dr. Amaro started her independent research career in the Deparments of Pharmaceutical Sciences, Computer Science, and Chemistry at the University of California, Irvine. In 2010 she was selected as an NIH New Innovator for her work developing cutting-edge computational methods to help discover new drugs. The following year, she received the Presidential Early Career Award for Scientists and Engineers. In 2012, Dr. Amaro opened her lab at UCSD in the Department of Chemistry and Biochemistry.

Research in the Amaro Lab is broadly concerned with the development and application of state-of-the-art computational methods to address outstanding questions in drug discovery and molecular-level biophysics. Her lab focuses mainly on targeting neglected diseases, Chlamydia, influenza, and cancer, and works closely with experimental collaborators to catalyze the discovery of new potential therapeutic agents.  The Amaro Lab is also keenly interested in developing new multiscale simulation methods and novel modeling paradigms that scale from the level of atoms to whole cells, and beyond.