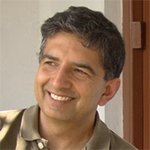 Salman Habib is a member of the High Energy Physics and Mathematics and Computer Science Divisions at Argonne National Laboratory, a Senior Member of the Kavli Institute for Cosmological Physics at the University of Chicago, and a Senior Fellow in the Computation Institute, a joint collaboration between Argonne National Laboratory and the University of Chicago.

For the last two decades, Habib has been very interested in the intelligent application of parallel supercomputers to attacking physics problems. This has led to algorithm and code development in a variety of fields and on a variety of platforms, beginning with the Connection Machines in the early 1990′s and leading on to the current BG/Q system, Mira, now installed at Argonne.

More recently he has become involved in efforts — with cosmology as the primary arena — to apply advanced statistical methods to complex inference problems where the datasets are very large (with small statistical uncertainties) and the forward model predictions involve supercomputer calculations. Habib is a member of the Dark Energy Survey (DES) and the Large Synoptic Survey Telescope (LSST) projects.

Habib received his Ph.D. from the University of Maryland and did his undergraduate work at the Indian Institute of Technology, Delhi, India. He was a postdoc at the University of British Columbia, and later, a postdoc and staff member in the Theoretical Division at Los Alamos National Laboratory before moving to Argonne in 2011.