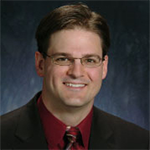 Todd Munson  is currently working on developing numerical optimization methods for high-performance architectures in the PETSc/TAO library and applying these methods to solve challenging problems with, for example, partial differential equation constraints and discrete values; and is Deputy Director for the ECP Co-Design Center for Online Data Analysis and Reduction (CODAR).

His current and past development work includes:

He has worked on many applications with interdisciplinary teams including economics and energy applications, support vector machine training, scheduling in situ data analyses, vehicle platooning, r-refinement of meshes, phase retrieval, computing mountain passes and transition states, and other areas.

Munson received his Ph.D. from the University of Wisconsin-Madison in 2000. He is a Computational Scientist in the Mathematics and Computer Science Division at Argonne National Laboratory and a Senior Scientist for the Consortium for Advanced Science and Engineering at the University of Chicago.  He is a past Givens Research Associate and Enrico Fermi Scholar at Argonne.

In recognition of his scientific accomplishments, he was awarded a Presidential Early Career Award for Scientists and Engineers in 2006 for ​“pioneering work in the development of algorithms, software, and problem-solving environments for the solution of large-scale optimization problems” and is a National Academy of Sciences Kavli Fellow.  He shared the Beale-Orchard-Hayes Prize for Excellence in Computational Mathematical Programming from the Mathematical Optimization Society in 2003 for his work with NEOS.