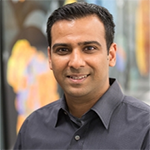 Venkatram Vishwanath is a computer scientist at Argonne National Laboratory. He is the Data Science group lead at the Argonne leadership computing facility (ALCF). His current focus is on algorithms, system software, and workflows to facilitate data-centric applications on supercomputing systems. His interests include scientific applications, supercomputing architectures, parallel algorithms and runtimes, scalable analytics and collaborative workspaces. He has received best papers awards at venues including HPDC and LDAV, and a Gordon Bell finalist. Vishwanath received his Ph.D. in computer science from the University of Illinois at Chicago in 2009.