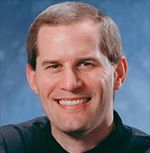 Steve Tuecke is Deputy Director at The University of Chicago’s Computation Institute (CI), where he is responsible for leading and contributing to projects in computational science, high-performance and distributed computing, and biomedical informatics.

Prior to CI, Steve was co-founder, Chief Technology Officer, and on the board of Univa Corporation from 2004-2008, and also served as Univa’s first Chief Executive Officer. Univa provides open source and proprietary software for the high-performance computing and cloud computing markets. Steve helped lead Univa through several new product launches, multiple venture capital investment rounds, and the acquisition of United Devices. He continues to serve on Univa’s board and as CTO advisor.

Prior to Univa, Steve co-founded the Globus Project, with Dr. Ian Foster and Dr. Carl Kesselman. He was responsible for managing the architecture, design, and development of Globus software, as well as the Grid and Web Services standards that underlie it.

He began his career in 1990 as a software engineer for Foster in the Mathematics and Computer Science division at Argonne National Laboratory. In 1995, Tuecke helped create the Distributed Systems Laboratory at Argonne which, under his management and technology leadership, became the premier Grid research and development group in the world. In 2001, Tuecke focused on Globus architecture and design, creating Grid and Web Services standards, and expanding corporate relationships.

In 2002, Tuecke received Technology Review magazine’s TR100 award, which recognized him as one of the world’s top 100 young innovators. The same year, he also was named to Crain’s Chicago Business “Forty Under 40” and described as one of the Chicago area’s “best and brightest.” In 2003, he was named (with Foster and Kesselman), by InfoWorld magazine as one of its Top 10 Technology Innovators of the year.