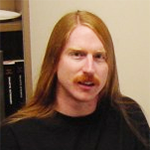 Dean Townsley’s research interests lie in refining stellar physics via its application to novel and dynamic astrophysical systems. More specifically, he studies white dwarf stellar remnants accreting mass from a companion in close stellar binaries. He has calculated the white dwarf’s thermal state and seismological characteristics and is currently utilizing these in tandem with observational measurements to derive general properties of the compact stellar binary population. He is also using hydrodynamic simulations to study the explosive nuclear events, which occur in accreting white dwarf binaries, including surface runaways (Classical Novae) and thermonuclear supernovae (Type Ia). Type Ia Supernovae are one of the premier probes of the expansion history of the universe. Dean is working to better understand their origin in mass transferring binaries and how the properties of the binary are related to properties of the explosion outcome observed.