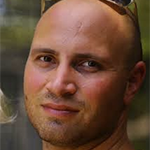 Aaron Knoll is a researcher at SCI working on ray tracing methods for large-scale scientific visualization. He received his Ph.D. from the SCI Institute at the University of Utah in 2009, which focused on on methods for ray tracing implicit surfaces, particularly applied to visualizing large data on CPUs. Aaron was a postdoctoral fellow at the University of Kaiserslautern in Germany, and then at Argonne National Laboratory, investigating multifield volume rendering and molecular visualization, respectively. At TACC, he continued to work with molecular dynamics data, investigated larger particle data from astrophysics, and collaborated with Intel on visualization software for ray tracing and volume rendering on CPU, GPU, and MIC (Xeon Phi) architectures. Now at the SCI Institute at the University of Utah, he is working to improve CPU programming models for visualization and pursuing new collaborations on in situ and streaming visualization with CEDMAV, led by Valerio Pascucci.