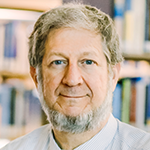 David Keyes is Professor of Applied Mathematics and Computational Science and the Director of the Extreme Computing Research Center, and was founding Dean at KAUST. Also an Adjunct Professor and former Fu Foundation Chair Professor in Applied Mathematics at Columbia University, Keyes graduated in Aerospace and Mechanical Sciences from Princeton in 1978 and earned a doctorate in Applied Mathematics from Harvard in 1984. Before joining KAUST, he led scalable solver software projects in the ASCI and SciDAC programs of the U.S. Department of Energy.

He is a fellow of SIAM, AMS, and the AAAS, and has been awarded the ACM Gordon Bell Prize, the IEEE Sidney Fernbach Award, and the SIAM Prize for Distinguished Service to the Profession.