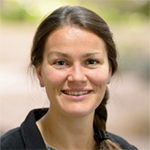 Elise Jennings is a computer scientist at the Leadership Computing Facility at Argonne National Laboratory. Her expertise is in statistics and sampling methods as well as machine learning applications. Previously she was a research associate in the astrophysics theory group at Fermi National Laboratory and an associate fellow at the Kavli Institute for Cosmological Research at the University of Chicago.

Her research is focused on understanding large scale structure clustering statistics in our Universe. In particular she is interested in modeling several systematic effects such as nonlinear growth, the bias between the galaxies and dark matter, both in the density and velocity fields, and redshift space distortions using N-body computer simulations and analytical methods such as perturbation theory.

She is also very interested in Bayesian statistics and sampling methods used in cosmological parameter inference. It is looking likely that a simple six parameter model describes our Universe and the growth of structure from close to t=0 until today. However the way in which we constrain these fundamental physical parameters, our choice of priors, likelihoods and implicit dependences on fiducial models can bias our results.