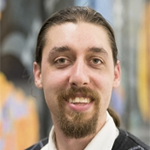 Hal Finkel got his start in high-performance computing as a scholar in the DOE Computational Science Graduate Fellowship program, studying high-energy physics at Yale, and then as a postdoc in the ALCF’s Early Science Program for Mira. In his current role as a Catalyst at the ALCF, he works closely with several physics-related projects, including those led by Argonne’s computational cosmology group studying large-scale structure formation. He also studies other aspects of numerical cosmology, general relativity and techniques for solving partial differential equations. Additionally, he is a regular contributor to the LLVM/Clang compiler project, and the lead developer of bgclang, an open source C/C++ compiler for Mira and other supercomputers. Hal serves as Argonne’s primary representative to the C++ Standards Committee.