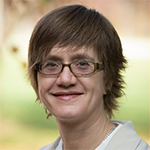 Nicola Ferrier received her doctorate from Harvard University in 1992. After postdoctoral fellowships at Oxford University and Harvard, she joined the Department of Mechanical Engineering at the University of Wisconsin (UW)-Madison in 1996. Dr. Ferrier became an associate professor in 2003 and professor in 2009. She received the NSF CAREER award (1997) and the UW Vilas Associates Professorship (1999) and the UW Honored Instructor Award (2009). In 2013, she joined the Mathematics and Computer Science Division at Argonne.

Dr. Ferrier’s research interests are in the use of computer vision (digital images) to control robots, machinery, and devices, with applications as diverse as medical systems, manufacturing, and projects that facilitate “scientific discovery” (such as her recent project using machine vision and robotics for plant phenotype studies).