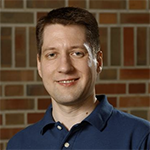 NAMD, recipient of a 2002 Gordon Bell Award and a 2012 Sidney Fernbach Award, and acceptance test for the Blue Waters sustainted petascale computing system, is a parallel molecular dynamics code designed for high-performance simulation of large biomolecular systems. NAMD scales beyond 200,000 cores for the largest simulations on high-end parallel platforms. NAMD has been downloaded by over 70,000 people, cited over 4000 times, and is used for virtually every biomolecular research project in our group, including our HIV capsid simulations.

I have been the lead developer for NAMD since version 2.0, released in 1998, and began as a full-time research programmer in 1999. I am responsible for implementing many of the numerical methods and performance-critical force evaluation routines in NAMD, and ensuring that the released software is reliable and efficient. I work closely with our computer science collaborators to maintain and improve the parallel performance of NAMD on a variety of platforms, including graphics processors. I also interact on a daily basis with biomedical researchers using NAMD to study the biophysical properties of proteins, lipids, and nucleic acids.