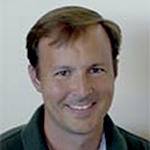 Robert D. Falgout (Rob) is a computational mathematician at CASC and the project leader for the Scalable Linear Solvers Project and the software effort hypre. His work is focused primarily on the development of multilevel methods, as well as the design and parallel computing issues related to delivering these methods to the scientific simulation community.

Rob earned his Ph.D. in Applied Mathematics at the University of Virginia in 1991 under the direction of James Ortega and joined Lawrence Livermore as a Postdoc that same year. He worked initially on the development of concurrent BLAS algorithm for dense matrix algebra, and later served as the technical leader for the ParFlow Project. He also served as the section leader for the Numerical Algorithms Section and as the Research Program Manager for the ASC Institute for Terascale Simulation. He is currently on the editorial board for the SIAM Journal on Scientific Computing and previously the journal Numerical Linear Algebra with Applications.