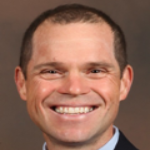 Dr. Thomas Evans is currently a distinguished R&D staff member in the Radiation Transport research group at Oak Ridge National Laboratory. He received a BS degree in Physics and Astronomy from Haverford College in 1992. He then received an MSHP in 1994 and a Ph.D. in Nuclear Engineering from Georgia Institute of Technology in 1997. Dr. Evans worked as a Technical Staff Member in the Radiation Transport Group at Los Alamos National Laboratory from 1997 – 2007 before joining ORNL.

Currently he is the PI of the ECP Applications project, “Coupled Monte Carlo Neutronics and Fluid Flow Simulation of Small Modular Reactors,” and he is the Deputy Lead of the Radiation Transport Focus Area in the Consortium for Advanced Simulation of LWRs (CASL) DOE NE Modeling and Simulation Hub. He also serves as the mentor and team leader for advanced radiation transport methods in NSED. Dr. Evans has over 90 publications in the general area of numerical modeling and simulation with a particular emphasis on radiation transport, linear and nonlinear solvers, algorithms and methods for high performance computing, and coupled physics.

Dr. Evans is currently an active member of SIAM and ANS. He has served as a TPC member for various ANS topical meetings and most recently served on the ANS M&C Executive Committee (2009-2014) as vice-chair in 2013, and Chair in 2014.