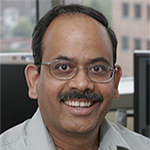 Professor Laxmikant Kale is the director of the Parallel Programming Laboratory and a Professor of Computer Science at the University of Illinois at Urbana-Champaign. Prof. Kale has been working on various aspects of parallel computing, with a focus on enhancing performance and productivity via adaptive runtime systems, and with the belief that only interdisciplinary research involving multiple CSE and other applications can bring back well-honed abstractions into Computer Science that will have a long-term impact on the state-of-art. His collaborations include the widely used Gordon-Bell award winning (SC’2002) biomolecular simulation program NAMD, and other collaborations on computational cosmology, quantum chemistry, rocket simulation, space-time meshes, and other unstructured mesh applications. He takes pride in his group’s success in distributing and supporting software embodying his research ideas, including Charm++, Adaptive MPI and the BigSimframework. He and his team recently won the HPC Challenge award at Supercomputing 2011, for their entry based on Charm++.