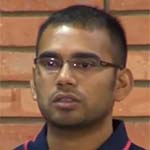 Vijay Mahadevan received his Ph.D. in nuclear engineering from Texas A&M University in 2010. While a Ph.D. candidate, he worked with scientists in the MCS Division as a Givens Associate. He joined Argonne as a Computational Postdoctoral Fellow in 2010 and was promoted to assistant computational scientist in 2013.

He has contributed to both the theory and the development of numerical solvers and their application in high-fidelity physics codes.